Let us take care of you and your smile.

Crowns and dental bridges are more permanent solutions for damaged or missing teeth. They are attached to your own teeth or implants to improve the appearance, alignment or strength of your teeth. Our Lauderhill Dentists can work with you to develop a personalized treatment plan and perform crown and bridge dental services to restore your smile and confidence.

A dental crown, or “cap,” is used in several different dental procedures, such as replacing large fillings; protect and restore a weak or fractured tooth; covering a dental implant, a discolored tooth or a malformed tooth; or joining a bridge. The procedure of the dental crown begins with the remodeling of the existing tooth so that the dental crown adjusts to it. Then, our dentists in Lauderhill, FL will take a dental impression of your teeth and send it to the dental lab for the crown. The dental crown can be made of gold alloys, other metals, acrylic, ceramic or porcelain, according to your preferences and your dental needs. Finally, the crown is fixed to the preformed tooth with dental cement.

A dental bridge is used to hide and replace a missing tooth. If you need a dental bridge procedure, you can expect our dentists to remodel the teeth on both sides of the space and take a dental impression. Once again, we will send this impression to a laboratory to make the bridge. Once it is complete, our dentists in Lauderhill, FL will cement it to the remodeled teeth on each side of the space, creating the appearance of well-formed teeth.

Dental crowns and bridges improve the appearance and function of the teeth, and can last a long time if taken care of properly.

There are a variety of situations that may require a tooth to be restored with a dental crown. The following are the most common:
A. Large filling: When a tooth has a cavity or a fracture that involves half the width of the tooth or more, it may need to be covered with a crown. This is because the remaining tooth around the large filling is so weak that it is prone to fracture.
B. Root canal: Root canal treatment leaves the tooth hollowed out and predisposes the remaining tooth to cracking. So, a tooth that has had a root canal should be restored with a crown immediately to prevent it from fracturing. This is especially important when it is a back tooth.
C. Broken cusps: Sometimes a cusp (the pointy part) of a tooth will fracture due to trauma. These are the parts of the tooth that take on a lot of the chewing stress, and typically simple fillings are not strong enough to replace them for the long term.
D. Undesirable appearance of teeth: Teeth that have an unacceptable appearance due to color, shape, or spaces between teeth can be made to look very natural and beautiful with crowns. This is a different reason than the previous three since it is more based on aesthetics than function, but it can still be a very valid reason depending on the situation

In some cases, while a crown is one option, there can be others. You might opt for a filling instead. Keep in mind, however, that a filling does not prevent you from needing a crown later on. Also, if a substantial portion of your tooth needs filling it may not give you the same kind of protection as crowns do. If the filling is extremely large, it can cause the tooth to break, making it irreparable.

The research on dental crowns indicate that most will last an average of 10 to 15 years. However, there are factors that influence this figure. A person who has a high risk of cavities (someone who has to have a couple of fillings each year for example), or grinds their teeth, or has poor oral hygiene habits may find that their crown lasts less than the average. On the other hand, we have some patients who have had the same crowns for 30+ years. The point is that the average lifespan is just that, an average. It should be taken as a guideline, but cannot be considered a guarantee. The mouth can be a very hard environment for the teeth, with chewing pressure and repetitive stresses from the muscles of the jaw. Add to that some of the negative factors listed above and you have the reasons why some crowns fail early. But with a well designed crown and some effort to improve oral care, we can maximize the lifespan of any restoration.

This term basically refers to the visible part of the tooth. There are two different types of crowns: the natural surface of your tooth or an artificial surface that a dentist can place, also known as a cap or dental crown. The latter come in a wide range of materials, including gold, stainless steel, porcelain, composites, and more. Beyond cosmetic dentistry, these devices can make eating, speaking and oral hygiene much easier.

Fitting and installing a cap is a routine procedure performed on-site in most family dentistry clinics. It typically requires only a local anaesthetic, such as lidocaine. People commonly experience minor pain, sensitivity or discomfort after the procedure, but this should gradually diminish over the following day or two. This type of irritation is often treated with over-the-counter medications, such as ibuprofen and toothpaste for sensitive teeth. If you’re concerned about possible pain, your dentist will be happy to discuss a management plan to suit your specific needs.

As mentioned, many people experience some type of discomfort immediately following the procedure. With proper installation, this should only be temporary. If crowned teeth continue to be sensitive to hot and cold, you may need to use desensitizing toothpaste on a regular basis. Sometimes the adhesive used to affix the device wears away, which can leave teeth prone to decay. Regular visits to your dentist for checkups and cleanings will help you prevent any potential problems caused by loss of adhesive. Overall, with proper routine care, this service has very few side effects.

Patients who have a number of chips, cracks, stains, or gaps between teeth visible when they smile may consider Cosmetic Dentistry Veneers.

Dental Bonding is used for Cosmetic purposes to improve the appearance of a discolored or chipped tooth. It also can be used to close spaces between teeth, to make teeth look longer or to change the shape or color of teeth.

There are countless Cosmetic Whitening Products available in local stores, but these over the counter options are unable to deliver the results they promise. Our Lauderhill Dental Team offers both in-office and take-home Cosmetic Whitening solutions that brighten smiles up to ten shades.

Few things are as scary and painful as a dental emergency. When you need emergency dentistry, Dr. Mark Wilde provides that much needed service in the state-of-the-art dental facility of Luxe Family Dental in Lauderhill, FL.

The Dental Bonding is the application of a tooth-colored resin material with adhesives and a high intensity curing light. The procedure gets its name because the materials are attached to the tooth. The joint is generally used for cosmetic purposes to improve the appearance of a discolored or chipped tooth.

Crowns and dental bridges are more permanent solutions for damaged or missing teeth. They are attached to your own teeth or implants to improve the appearance, alignment or strength of your teeth. Luxe Dental Dentists can work with you to develop a personalized treatment plan and perform crown and bridge dental services to restore your smile and confidence.

A simple extraction of teeth involves the removal of a tooth that is visible in the mouth. This could mean removing a damaged or decayed tooth, or removing teeth before receiving the brakes.

Inside your tooth, under the white enamel and a hard layer called dentin, you will find a soft tissue called pulp. This tissue contains blood vessels, nerves and connective tissue, which help the root of your tooth grow during its development. A fully developed tooth can survive without the pulp because the tooth continues to be nourished by the tissues that surround it.

Dental implants are tiny titanium posts and their main objective is to replace any damaged teeth. It is a minimum access surgical procedure that can easily be done in our Lauderhill Dental Office where we have everything necessary and doctors with enough experience to guarantee a pain free procedure. With Dental Implants you have the option to replace one or all of your teeth.

Schedule your visit
Get Directions 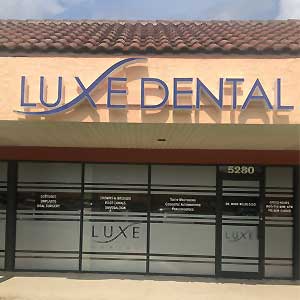